The "Confetti Villages" of the Tyhume Valley by Bonnie Frick-Jesteadt 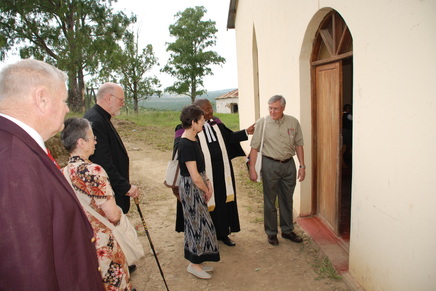 “Molweni!” shouted the crowd gathered in front of the Macfarlan church to greet us.  Ed and I had arrived in the expansive, verdant Tyhume Valley of the Eastern Cape Province in the country of South Africa, the southern most country on the exotic continent of AFRICA. This area is part of the “Xhosa Homelands” where the whites sequestered the blacks during the era known as apartheid. We, along with the other four in our party from Mission at the Eastward [MATE], had picked one of the hottest days of February, right in the middle of the southern hemisphere’s summer, to make our appearance!  I wore a long dark skirt and a black blouse which seemed to be the respectful attire to wear to the church service.   Ed wore long pants and a dress shirt with a MATE logo on it.  Shown here are Charlie, Joanne & Rev. George and Rev. Luzuko with Ed and I  as we prepare to enter the Macfarlan Church
The Elders [men] of the church wore their Sunday best: black pants with white shirts and white jackets, black ties and dress shoes.   The women who belonged to the Women’s Association were in black skirts, white long-sleeved blouses and black hats.  Many people walked for kilometers over the dusty, rutted, so-called roads to get to the church in Macfarlan; many hitchhiked.  A very few drove cars or bakkies (small white trucks with enclosed backs containing a bench on each side crammed with people).
After she finished, Sister Gugwini invited all the people with HIV/AIDS, including about two dozen AIDS orphans, to come to the front of the church.  Along with the Elders, Women’s Association and the choir, we were asked to come down and surround these people with our love.  It was a very moving experience for us, and, I believe, for everyone assembled. Our two American ministers and Vusi Mpokeli - head of Heifer International's office in this province -  prayed over the people.  Tears began to fall.
The government of the country has been a big stumbling block in getting medications to the people and in gaining control of this pandemic.  Former President Mbeki and his Health Minister espoused the theory that the virus was designed by whites to kill off the blacks!  Moreover, they held the same view about the antiretroviral drugs (ARVs) that were brought in to help the diseased population.  Their answer to the problem was to recommend traditional herbal treatments and good nutrition. In some places, witch doctors are still widely used.  The words of an Assistant Health Director challenging this viewpoint eventually got to President Mbeki, although the woman soon lost her job for causing an affront to the President. Thankfully, this view has changed, and President Mbeki and his Health Minister are now out of power.  But the stumbling blocks are now whether the people can afford treatment and if they can get transport to hospitals in big towns and cities, which currently [2008] are the only places to offer the drugs.  The situation is still not good but it is heading in the right direction.  Everything happens ever so slowly in Africa; Ed calls it “South Africa time”.  People die waiting for the wheels of government to turn!
This was an amazing and life-changing trip for me. We felt privileged to help these people who are one and the same as we, who have endured the indignities of apartheid, and who need and want our help to make their lives better.  We wanted to share their load a little and to KNOW them.  We are hoping to continue this partnership for many years to come.   I do not know the word in Xhosa, but I know the word in Arabic, “Inshallah,” says it all - “If God wills it!”
Bonnie Frick-Jesteadt
May 2008